A Closer Look at Drea Renthal

I have to admit, I have been guilty of overlooking Drea up until now. Taking a stress to acquire a new TL seems decent, but not overwhelming. Makes Proton Torps nice (almost guarantees you 3 hits and a crit). But stress on Y-wings is generally bad. 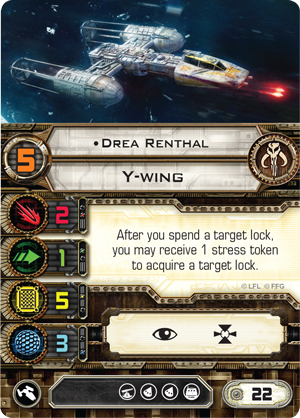 All hail the pirate queen.

However, I had a bit of an epiphany moment the other day and looked at her card text again. It doesn’t say anything like “once per round”, or “you cannot use this ability if you have a stress token”. Hell, it doesn’t even say you have to acquire a target lock on the ship you’re currently shooting at! So can we add Drea to the list of S&V ships you don’t want to go anywhere near? That might be the case.

So what happens if you decide to never bother trying to clear that stress? True, you won’t be able to do any K-turns, hard turns at speed 3, or a straight 4. That kinda sucks, I suppose. But you do get some fun options that I hadn’t considered before. Tycho might even get jealous!

The portrait of this droid is just so unsettling… a whole different type of unhinged astromech.

You can get some real love out of BTL-A4 and an Ion Turret, for starters. Tack on R4-B11 if you want, and you can really start the party. Grab a Target Lock on any old mook that wanders within range (any blocker or support ship will do) and take your primary shot. Go ahead and spend the TL if you miss, and grab a new one for R4-B11. Suddenly that opening primary shot might stand a chance of hitting against high agility targets.

When you spend that TL on R4-B11, you have a choice. You can reacquire the TL on the same target, or you can switch it up. This is especially handy if the primary target dies, or will be summarily executed by your support ships later in the round.

So now you get to blast away with your ICT at whichever target you picked, re-rolling your misses (again) and forcing them to re-roll their evades (again). You can see how this will start to add up rather quickly. Eventually you will be forced to turn around, and admittedly that will be unpleasant. With a bit of luck though, you will have some some decent damage by now, and the primary targets will be fairly ripped up and ionized. If the rest of your squad is control oriented, like some more Y-wings with ICTs, then they can keep someone pinned for a round while you start with the hard 2’s.

I am thinking Drea might be a fun option to crack the defenses of an irritating high agility target, so that the rest of your squad can pounce on it and finish it off. In my first round of testing, Drea managed to ionize Echo repeatedly, which was great since nobody else in my squad had much hope of landing any damage on him/her/it!

Another fun perk is that she can tackle enemy ships with Rebel Captive, and eat the stress that would otherwise cripple some builds. If she’s among your highest PS ships, or if you have a bunch of others at the same PS value (entirely possible since PS5 is so common among Scum pilots), then she’ll prove to be pretty helpful.

Overall she seems pretty mean at 30 points. And that is a zone where Scum don’t seem to have many contenders. They have a lot of competent ships at 25 or under, and a lot at 40/50, but mostly it seems to be HWKs stuck in the 30s. Maybe some heavily weighed down HLC Scyks, but I still don’t know how I feel about them in 100 pt matches. The Spacer with Mangler Cannon seems a safer bet in my books (and I get to call them Spanglers/Spenglers — don’t cross the streams!).

I will need to start playing with this setup more to see how viable it can be, but the thought of spending 4 TLs per turn and generating 4 stress in the process is rather amusing. So long as there is a ship within range 3, it’s hard to break the cycle without some relatively rare abilities like Wes, Countermeasures or Expert Handling shedding the TLs… though once the cycle is broken, she’s admittedly rather stuck.

There’s also less exciting ways to run the combo, like staying away from the BTL-A4 title in order to keep your 360 arc for the ICT (probably the best option, to be honest). An ICT that re-rolls to hit and forces the enemy to re-roll evades is still rather reliable, and the ability to quite freely switch up your TLs to a new ship still exists. Or you can take the Unhinged Astromech to try and manage the stress better, likely a losing battle.

Agromech can be used to start the cascade of target locks; she focuses and fires at anyone within range with her turret, thus allowing her to pester high PS ships, but without the R4-B11 the combos lose potency…

I think ICT is a given on Drea builds, while the other upgrades are at your personal preference. Some will prefer an Unhinged Astromech to shed stress and keep her flexible (if yo can shed the stress it might allow her to run Engine Upgrade to dodge the arcs of low PS ships, points permitting), while others will like to add R4-B11 and a Proton Torpedo to spike some major damage. Update: After discussing Drea with torps, I ran a version with ICT and a proton torpedo added and the damage spike was definitely worth it. Realistically, I don’t think you can go wrong with either of these builds, it just depends how many leftover points you have to spend after equipping the rest of your squad.

I am really liking Drea. She offers some decent utility without breaking the bank on points. One of my favorite little details about her is the yellow color scheme on her Y-wing. Makes it one step closer to a Daewoo Lanos for when I run a list like this one:

Between Warthogs, Drea and plain old cheap turrets as viable options, I never thought I’d be this excited about Y-wings… I didn’t expect to be saying that!