Breaking Down the Breakdowns

We’ve all heard the old maxim (incorrectly attributed to Plato):

Those who cannot remember the past are condemned to repeat it.

You can dispute its origins, but the wisdom is undeniable. As gamers, we make a huge number of decisions before, during and after each game. Everything from army list creation to deployment and maneuvering matters, and any one decision can make or break you in that moment, so it’s very helpful when you can look back and identify the true cause of your success or failure. This is how you learn the most from your games. 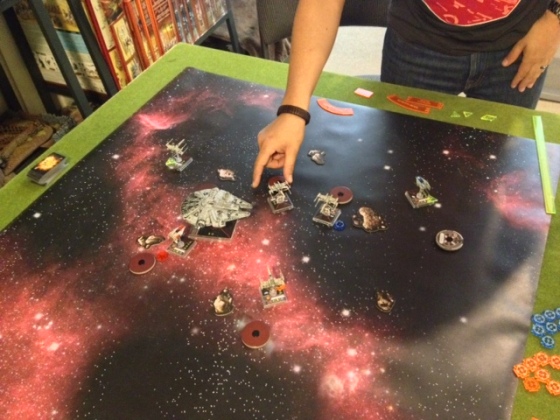 Early action — so far so good.

While this concept surely applies to Warhammer, my most recent example of this was my game X-wing game against Ward. It was my first time fighting the Falcon, and while I did lose a close decision in the end, I went along for a few days attributing the loss to a few bad maneuvers, namely aggressive K-turns (fancy Star Wars talk for U-turns) into a pilot with higher skill than mine, allowing Ward’s sole remaining X-wing to shoot first in the head-on confrontations that ended the game. As I happened to snap a few photos of the crucial turns, thinking I might post them up here, I later realized what actually caused the defeat.

Ward brought out the significantly upgraded Chewbacca Falcon, which is much more survivable than the others (while Han pukes out damage dice and re-rolls, and Lando offers synergy by giving free actions to nearby allies). Chewie is able to ignore critical damage, which definitely caused me some headaches. He was basically at 100% effectiveness until he dropped dead, while a few bad criticals can rapidly diminish any other ship’s abilities. Chewie’s wingmen were a pair of Pilot Skill (PS) 4 Red Squadron X-wings, effective and versatile ships.

My list was PS8 Tycho Celchu (A-wing) with Push the Limit, PS1 Prototype A-wing, Garven Dreis (PS6 X-wing who died fairly early), and a Red Squadron X-wing of my own. I’m not going to bore you with all the other upgrades in our list, as they aren’t relevant.

The general advice given to players facing the Millennium Falcon for the first time is to focus on it early, and take it out fast. If you can make it run into you, thereby sacrificing its actions, even better. I definitely developed a bit of Chewbacca-related tunnel vision (which I can’t help but refer to as Chunnel vision), and it was a mistake or two in engaging Chewie’s last wingman that cost me the game. Let’s check the gameplay footage. 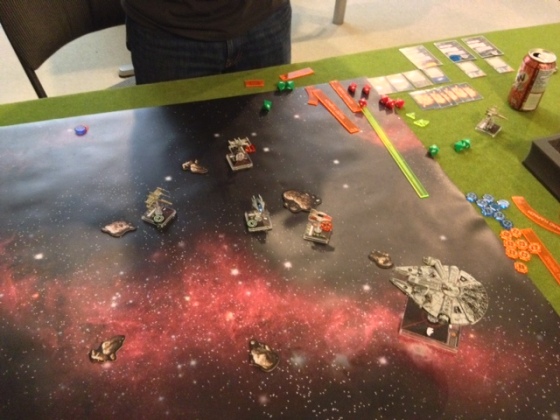 Beginning of the end; surely I can deal with that flanking X-wing eventually…

I took this picture because I recognized that this was the beginning of the endgame; the Falcon was on its last legs and had K-turned into its pursuers, and I thought my trailing X-wing could be able to cover his X-wing (the one that just K-turned directly behind my blue Prototype A-wing).

In this round, the Falcon barely survives a torrent of blaster fire and Tycho incurs a critical hit (cockpit damage, dropping him from PS8 all the way down to PS0). This sucks, as Tycho would now shoot dead last every turn instead of shooting first. He’s also got one hull point left, so he’s got to be very careful. 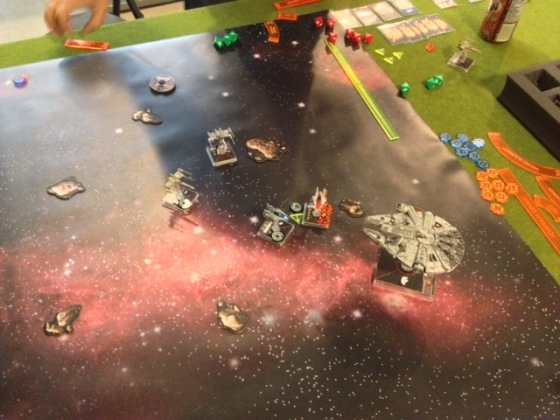 The middle of the end — this is where things started dying awfully quickly.

I thought I would be able to put both his X-wing and the wounded Falcon in my remaining X-wing’s fire arc, but I was wrong. Ward’s X-wing slammed on the brakes (straight 1) and mine overshot (straight 2), so I had way too many guns pointed at the Falcon and nothing prepared to deal with the angry X-wing. That turn I put some extreme overkill on the Falcon, wasting most of my offense, and in turn had my X-wing vaporized.

I was so focused on finishing off the Falcon that I didn’t turn my X-wing into his, which totally would have been the smart thing to do. The odds are that my X-wing still would have died (as it had no shields going into that point-blank exchange), but it would have been able to shoot first (I had the initiative) and put a dent in Ward’s, who was still untouched at this point in time. This really wasn’t a good spot — having an untouched X-wing on my tail, chasing a crippled Tycho and intact Prototype A-wing who would require a number of turns to do enough damage to bring down an X-wing.

I didn’t take any more pictures, but my Prototype A-wing pulled an immediate K-turn, going head-on with the more shooty but less elusive X-wing. This game statistically (slightly) favors offense over defense, and by pulling a K-turn and incurring Stress, I also lost my action for that round. So I was going head-on with an X-wing who could Target Lock/Focus to stack the odds further in his favor. Not a great move on my part. Splitting up my ships and going evasive probably would have been smarter, as I would have been able to use asteroids for cover and put someone on the X-wing’s tail quickly instead of forcing head-on confrontations.

After we made a pass at each other, one in which my A-wing took more damage than his X-wing, Tycho swung around and went at the X-wing head-on. Even with both Focus/Evade thanks to Push the Limit, Tycho suffered a single hit and went down before he could fire. Balls! That critical cockpit damage really screwed him up big-time. Now my Prototype A-wing had to deal with the X-wing on his own. At least he was about to move into a strong position.

In the end, I thought I had the upper hand but Ward’s final ship, which had more remaining hull points than mine, was able to surprise me. My A-wing K-turned to get in behind the X-wing but Ward boldly turned through an asteroid, sacrificing his action and taking another hit in the process. This completely caught my A-wing flat-footed and the X-wing roasted him in another head-on encounter. Shooting last sucks… I hate it 😛

In all seriousness, Ward’s patience and well-timed aggression won out in the end. He didn’t do anything stupid when he was behind my ships, moving slowly and keeping me in front of him. When I did make an aggressive K-turn, he read it in advance every time and was able to capitalize. That being said, I completely blew my chance to deal with his X-wing earlier. My X-wing could have easily turned into him and shot first at point-blank, likely doing a couple of hits in the process. Instead, I let the Chunnel vision take over and it ended up costing me the game. My moves with the A-wings weren’t great, but it wouldn’t have mattered much if his X-wing went into the final chases having taken some damage.

This was a great learning experience for me. Even if I hadn’t lucked out and recorded the exact moment where things went wrong, I would have learned firsthand how the big ships move (causing a few major pileups along the way) and how much damage they can tank before going down.

In 40k I always try to focus on the immediate threats that I am most likely to take down before they do much damage. In other words, I go for a pre-emptive strike against the glass cannons. If Ward had taken Stealth Device equipped A-wings and not X-wings to flank the Falcon (a list I have seen online before), my strategy would have worked better. A-wings lack punch but can dodge like bastards, so in that case focusing solely on the Falcon would have been more sensible. X-wings however aren’t much harder to hit than the big ships, and they also pack considerable punch. I should have dealt with them sooner, or at least been more careful around them, but I underestimated their threat level and it severely burned me in the end.

The culmination of our experience is not our win/loss record, which only records the past, but our future wins and losses. So the next time I run up against a Millennium Falcon list, I will have some lessons (learned the hard way) to guide my actions. I will still likely punish it as fast as I can, but not if it means exposing myself too badly to his escort fighters. And maybe I’ll think twice about pulling so many K-turns with my PS 1/0 ships…

I hope my X-wing example didn’t throw too many of my Warhammer fans, because the lesson does transfer across all games (and life in general). If you look hard enough, the true causes of your successes and failures often go back further than you realize. One careless move can set up a bad situation several turns down the road, so think like a chess player and don’t focus on the present so much that you forget to plan for the next two or three moves. 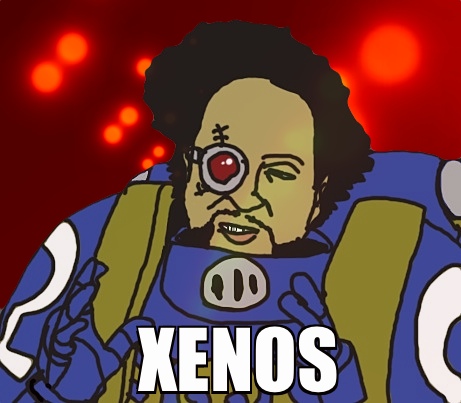