Since GW decided to ship Saturday’s new High Elf releases to Warp 3 on Friday, making it impossible for the stuff to be delivered on time, I find myself with no elves to play with this afternoon.

Possibly for the best, since I still want to finish my test World Eater marines at some point soon. Check this guy out: 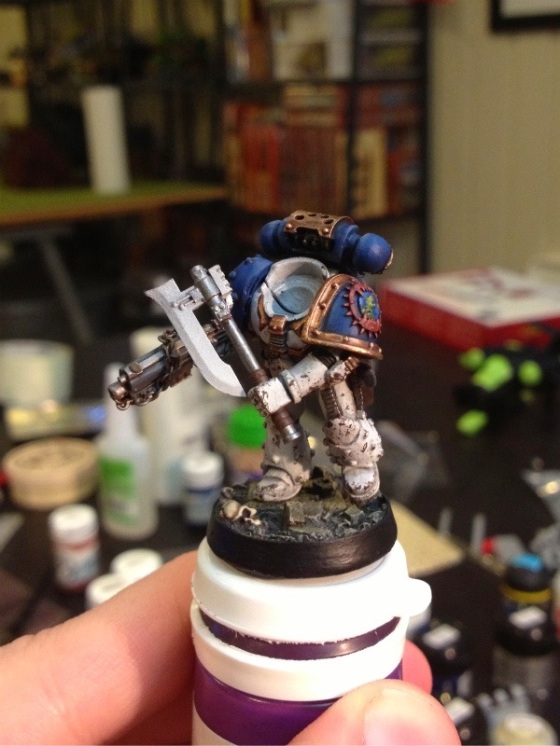 Been waiting to try this blue and white scheme for ages!

Like the Word Bearers, he’s a total change in style from my old armies. Subtle shading, with more focus on weathering and other cool effects instead of just Tron-style edge hilights. The colors are similar to this tutorial on the Painting Bunker, but with some P3 substitutes. I’ll go into more depth once I have everything finalized.

The power axe blade is likely going to be a turquoise NMM style; since I did a Word Bearer’s plasma coil this way previously, I know this will work with the scheme of both Heresy era projects. More colors to tie the allies together will help them look coherent on the tabletop.

This sergeant will also have a pretty cool helm with mohawk officer’s crest. It was left off until the backpack and shoulder pads could be separately airbrushed and glued on, which was a good plan since the mohawk actually contacts the backpack and could have made assembly impossible if it was glued on from the start. Every now and then planning pays off big!

Anyway, overtime in the Chicago Blackhawks/Minnesota Wild game is about to start, so I’m off again. Keep painting!

← Only You Can Prevent Forest Fires
Armies of the Asur →